But Where Will I Give Birth?! 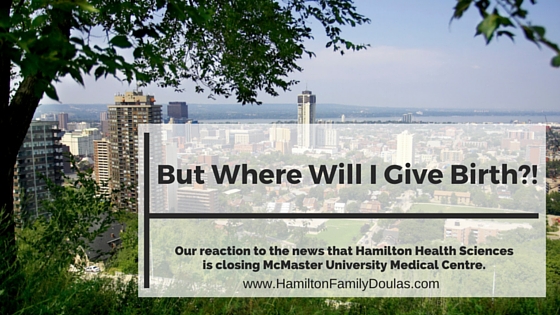 The future of birth in Hamilton is going to look very different. Hamilton Health Sciences has announced that it will be leaving the McMaster University Medical Centre site and building a new facility in downtown Hamilton.  What does that mean for birthing families?

It means that there will be no birth and emergency services in the entire west end of the city to service patients in West Hamilton, Waterdown, Ancaster and Dundas.

Low risk births will continue to be welcomed at West Lincoln Memorial but who wants to drive from the west end and west and central mountain all the way over to Grimsby?  And we’ve attended births at that facility. While it’s a lovely secondary care facility, it’s a tiny labour and delivery facility that can handle only a half dozen patients at a time.

And what about St. Joe’s? The delivery ward in the Martha Wing is not part of Hamilton Health Sciences but instead is it’s own corporation called St. Joseph’s Healthcare Hamilton. Will there be two birthing facilities within walking distance of each other?!  Or will the Local Health Integration Network – Hamilton is part of LHIN 4 which includes Hamilton, Haldimand, Niagara and Brant – force St. Joe’s to close it’s Labour and Delivery ward when the new facility opens?

If you are pregnant and having baby in a few years time you may only be able to give birth downtown or in Grimsby instead the much more evenly distributed plan that includes McMaster University Medical Centre, St. Joe’s and West Lincoln.

And you will continue to be out of luck if you are on the mountain. Despite expanding back to full services at the Juravinski on Concession – I still call it the Henderson – there are no low risk birth services offered. That leaves the entire mountain totally unsupported. The mountain had well over 100 000 residents as of 2011. Since then there has been an explosion of housing development at the southeast ends of the city in the old town of Hannon and Binbrook most notably and in the southwest mountain in Ancaster with new housing going up weekly in those areas.

This rapidly expanding population of young couples and families are in desperate need of birthing facilities that are easy to access.  Out toward Hannon and Binbrook families would take the Linc Expressway to highway 403 to give birth at McMaster. Ancaster families also take highway 403 to McMaster.  Now, their travel in labour will be significantly longer.

These changes and deficiencies in the system point to the need to create either a labour and delivery facility on the mountain and/or a low risk birth centre staffed by midwives with access to the emergency services of the Juravinski.

How does Hamilton Family Doulas fit into this?  Doulas can provide hands on, non-clinical support in early labour in our clients’ homes.  When the woman in labour is ready to go to the hospital their doula will go with them providing end-to-end support.

Get in touch with us today to discover how our exceptional birth doula support services can help you have a calmer, safer feeling birth, no matter where you have your baby.